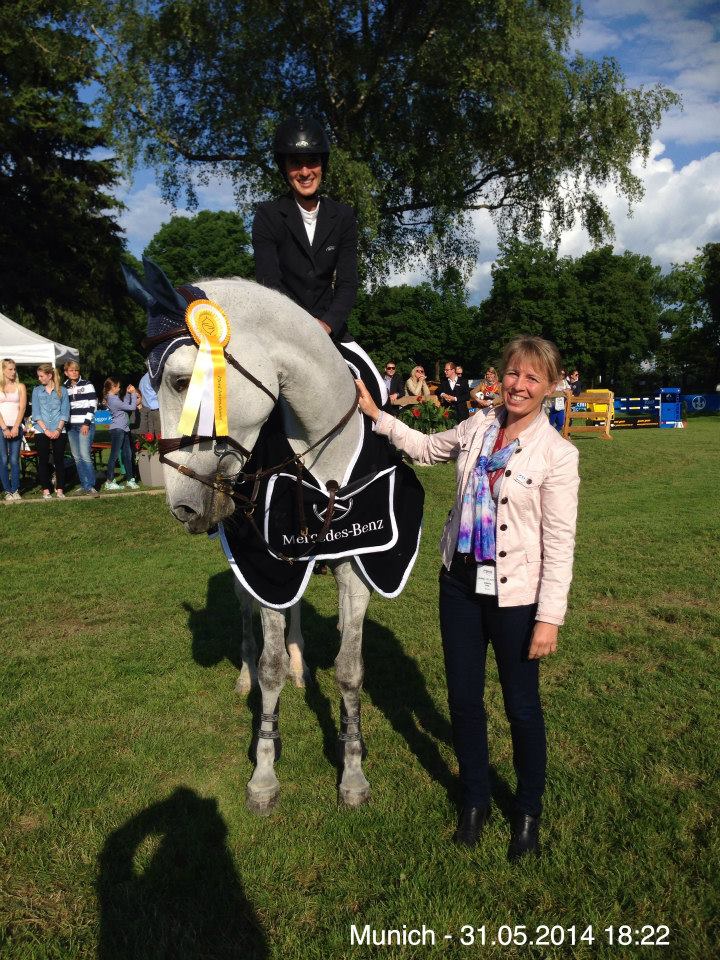 June 25, 2014; Wiesbaden, Germany – From the 6th to the 9th of June, Germany played host to an exciting weekend of equestrian competition in jumping, dressage and eventing as the 78th Pfingst-Turnier Wiesbaden 2014 began. Representing the United States, Lauren Tisbo and her horse La Centa leapt to victory in Friday evening’s round of showjumping, breaking records as they went.

Held in the Biebricher Schlossparks, the Pfingst-Turnier Wiesbaden has become one of Germany’s most popular equestrian competitions. What started as a small, local competition has grown into a massive international tournament drawing almost 65,000 spectators. Top riders from around the globe are out to impress in the highest classes of dressage, jumping and eventing and this year was no different.

Lauren Tisbo and La Centa, representing Tequestrian Farm out of Wellington, Florida, began their performance at this year’s Pfingst-Turnier with a record breaking showjumping round. After five intense rounds and riders from around the world competing for top place, Tisbo and La Centa tied for first with German rider Gerrit Schepers. As the only female and only rider representing the United States in the 6-bar, Tisbo found herself with the full backing of the over 25,000 strong crowd cheering her on to victory.

Not only was Tisbo able to come out on top, she broke the Pfingst-Turnier’s previous showjumping record for the 6-bar. A set of 4 jumps in a row, with two strides in between, a 6-bar competition is daunting to even riders of the highest level. With many of the world’s top riders being knocked out by the set of 4 jumps, topping out at 1.95 meter (6 feet 4 inches) jumps, Tisbo and La Centa sailed over the set with room to spare. Tied with German rider Gerrit Schepers, both riders squared off against an intimidating 2.05 meter (6 foot 8 inch) 6-bar sprawl. To the delight of the spectators, both Tisbo and Schepers cleared the jumps, setting a dual new high-record for the Pfingst-Turnier’s 6-bar showjumping. To further illustrate how special this accomplishment was, Tisbo and Schepers were named co-winners of the six-bar because they couldn’t go another jump-off round, as the 2.05 meter effort was at the very top of the standards.

Tisbo and La Centa competed the week prior to Wiesbaden in Munich in another 6-bar competition, winning the competition after clearing 1.95 meters. Commenting on their string of success, Tisbo said: “I tried La Centa in the 6-bar the week before in Munich for the first time. We were surprised by how easily she jumped 1.95 meters. After that, I decided to bring her to Wiesbaden to try it again. Penny [La Centa] can be a challenge but I think she has found a new specialty as a 6-bar horse. What a thrill to win at a show like Wiesbaden, the ring is amazing and the large crowd really created a great atmosphere. It is a show I hope to come back to many times in years to come.”